Martial Arts for Kids and Adults in Angleton, TX 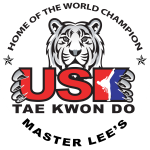 Master Lee’s USK TKD is committed to inspiring and empowering you to reach your full potential.

Our focus is on bringing you the best martial arts lessons in the Angleton area to give you the tools you need to defend yourself, maintain great health, and become the best version of yourself for a successful living.

Master Lee’s USK TKD has earned the reputation in Angleton, as well as Danbury, Snipe, West Columbia, Prairie, of being the top martial arts school for enriching our students’ lives and equipping them to face life with the winning edge.

Many people believe the martial arts are about just fighting, but our program is much, much more than that. When you train in our martial arts classes you take advantage of the best self-improvement system in the world.

Grand Master Lee began his journey in Taekwondo at a young age in his home town of Seoul, South Korea. He has built a reputation for himself, not only in South Korea, but all over the globe!

Grand Master Lee attended the esteemed Yong-in University in Seoul, South Korea where he joined their Taekwondo exhibition team and after practicing and training long and hard, he demonstrated his skill sets and became the team captain! He graduated from Yong-in University with a degree in physical education and is licensed to teach at the elementary and middle school levels in South Korea.

After his time in college, Grand Master Lee began his obligatory military service. During his service, he was awarded the title of Taekwondo Master and was given the task of training a special strike troop of the 15th Army Division in the South Korean military.

In 1998 Grand Master Lee auditioned to become a part of the South Korean National Demonstration Team! This team, still operating and demonstrating to this day, travels the world demonstrating high levels of Taekwondo and acrobatic skill.

In 2000, Grand Master Lee was invited to coach the New England Junior Olympic team out of Massachusetts.

While Grand Master Lee’s Taekwondo credentials are extensive, holding a 7th Dan (degree) black belt in Taekwondo through the Kukkiwon as well as being a licensed Taekwondo referee, he also holds black belts in Judo, Gumdo (Korean swords), and Hapkido.

“When I was a child, I began my  journey in Taekwondo and the positive impact it had on my life was remarkable. It has always been my dream to open my own school and pass on the skills, knowledge, and inspiration that Taekwondo has given to me. With the fulfilment of that dream, I now proudly serve the Angleton community and feel an overwhelming sense of honor and pride when I see our students grow into happier, healthier, more confident children, teens, and adults!”O

See the Results for Yourself

Check Out our Web Specials!

What people are saying about Master Lee's USK TKD

Judi Genzer

Parent
Read More
"My child has excelled in school!"
She has been with Master Lee and his program for a year last January. He is absolutely the most patient man I have ever seen. I could go on and on with praises about his staff. You would not be disappointed if you put your child or children through this program and it’s something that they really want to do. Then you can sit back and see the outcome and be thankful that you sent them to Master Lee’s taekwondo.
April Cruz

Sibling
Read More
"Very welcoming place to have your kids!"
This school is such a great school my little sister goes to this school and Master Lee loves his students and treats his students very kindly and hes very involved with the kids at his school!
Christinna Vines

Parent
Read More
"Master Lee and his staff are wonderful!"
“They have high patience for the children and teach them life long skills!”
Song Lee

Associate
Read More
"He is a respectable, great master."
“I have known Master Lee for many years. He is the one of the best masters in the world. Students are lucky to have Master Lee. I especially respect his attitude, loyalty and tkd techniques.”
Previous
Next

LEARN ABOUT OUR OTHER PROGRAMS

Although many people think the martial arts are just about fighting, the truth is that the physical “kicking and punching” are really just the tools that I use to teach the more important, and MUCH more valuable lessons about yourself.